The price of Bitcoin (BTC) surpassed $34,700 to achieve a new all-time high after a strong overnight rally. Ether (ETH), the native cryptocurrency of the Ethereum blockchain, also surpassed $800 for the first time since May 2018.

What triggered the Bitcoin and Ethereum rally?

When the price of Bitcoin surpassed $33,000 on Jan. 2, some whales and high-net-worth investors warned that a 150 BTC sell order could retrace the market.

“A 150 btc market sell would retrace this whole thing. lmao the higher price goes, the more retail gets prices out, the lower bid support will be.”

Within hours he pinpointed the risk of a Bitcoin correction due to thin order books, BTC sharply pulled back.

However, Bitcoin recovered quickly after the initial drop, rallying to a new record-high within 24 hours.

The main catalysts behind Bitcoin’s rally have been the institutional accumulation of BTC on Coinbase and the short squeeze on Binance Futures.

Throughout the past three days, Bitcoin has been trading much higher on Coinbase than on other major exchanges, as Cointelegraph reported.

This means that aggressive buyers on Coinbase were continuously accumulating BTC despite the premium. 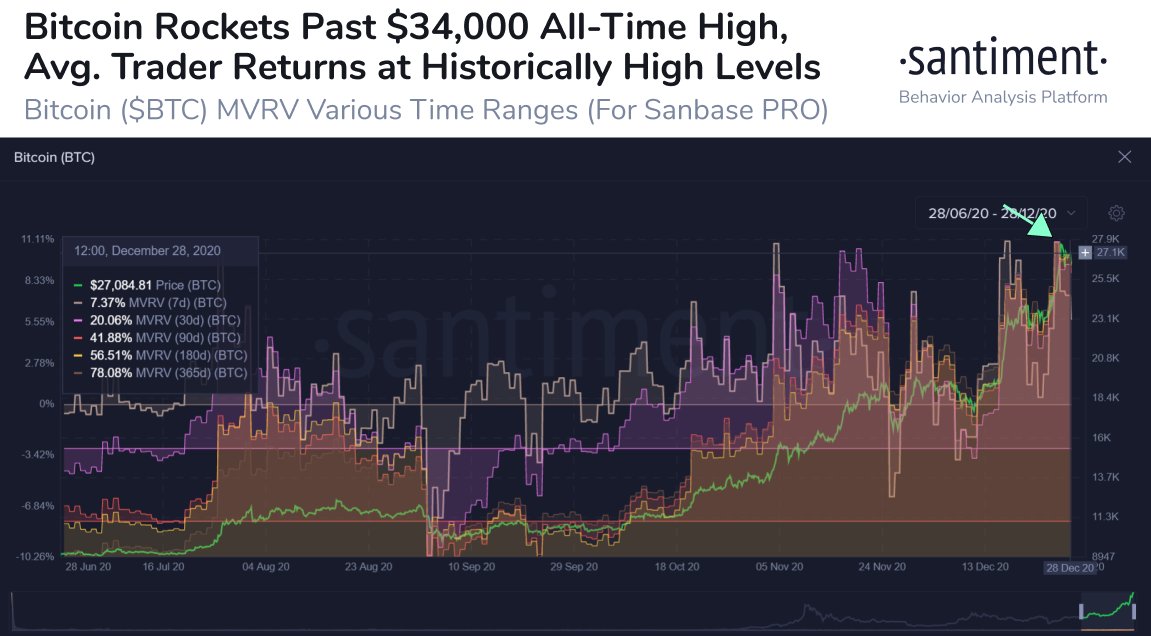 In the meantime, many traders on Binance Futures were shorting BTC, possibly expecting Bitcoin to top out at around $30,000. When Coinbase buyers continued to push BTC upwards, a short squeeze occurred. Analysts at Santiment explained:

“For those expecting a #Bitcoin correction to kick off 2021, the $34,000 #AllTimeHigh achieved 10 mins ago is showing how painful it’s been being a $BTC bear the past 10 months. Avg. trader returns haven’t been this high across the board since June 2019.”

Ether price rallied off of Bitcoin’s strong technical momentum. ETH/USD rose past $800 for the first time since early May 2018, demonstrating renewed momentum after stagnating throughout December.

A pseudonymous cryptocurrency trader known as “Mayne” said on Jan. 2 before the Ether rally that ETH is likely heading to $800. He said:

“ETH thesis still on track, daily close thru $620 we’d head to $800. I built a large long position in December and assuming $ETHBTC can hold a higher low, I think it’ll play out nicely. I should have had more BTC long exposure vs ETH in December, hoping ETH outperform for Jan.”

Ethereum has another major catalyst on the horizon as the CME futures exchange plans to launch ETH futures in February.

Considering the high level of institutional demand for Bitcoin since the first quarter of 2020, the demand could also boost Ether upon the listing.

Meanwhile, Bitcoin remains on an upward trajectory of price discovery, hitting new record highs on a daily basis. With a purported supply shortage and an institutional buying frenzy now spilling over into retail, the rally may still have a lot more room to run with $35,000 likely being the next psychological level to break.