Bitcoin (BTC) whales have been buying more since Christmas, on-chain data shows. This indicates that high-net-worth investors are continuing to eat up the supply of BTC.

It is nearly impossible to segregate institutional investors from individual investors through on-chain data. However, the trend shows that investors with large capital are increasingly entering into the Bitcoin market despite its rally. 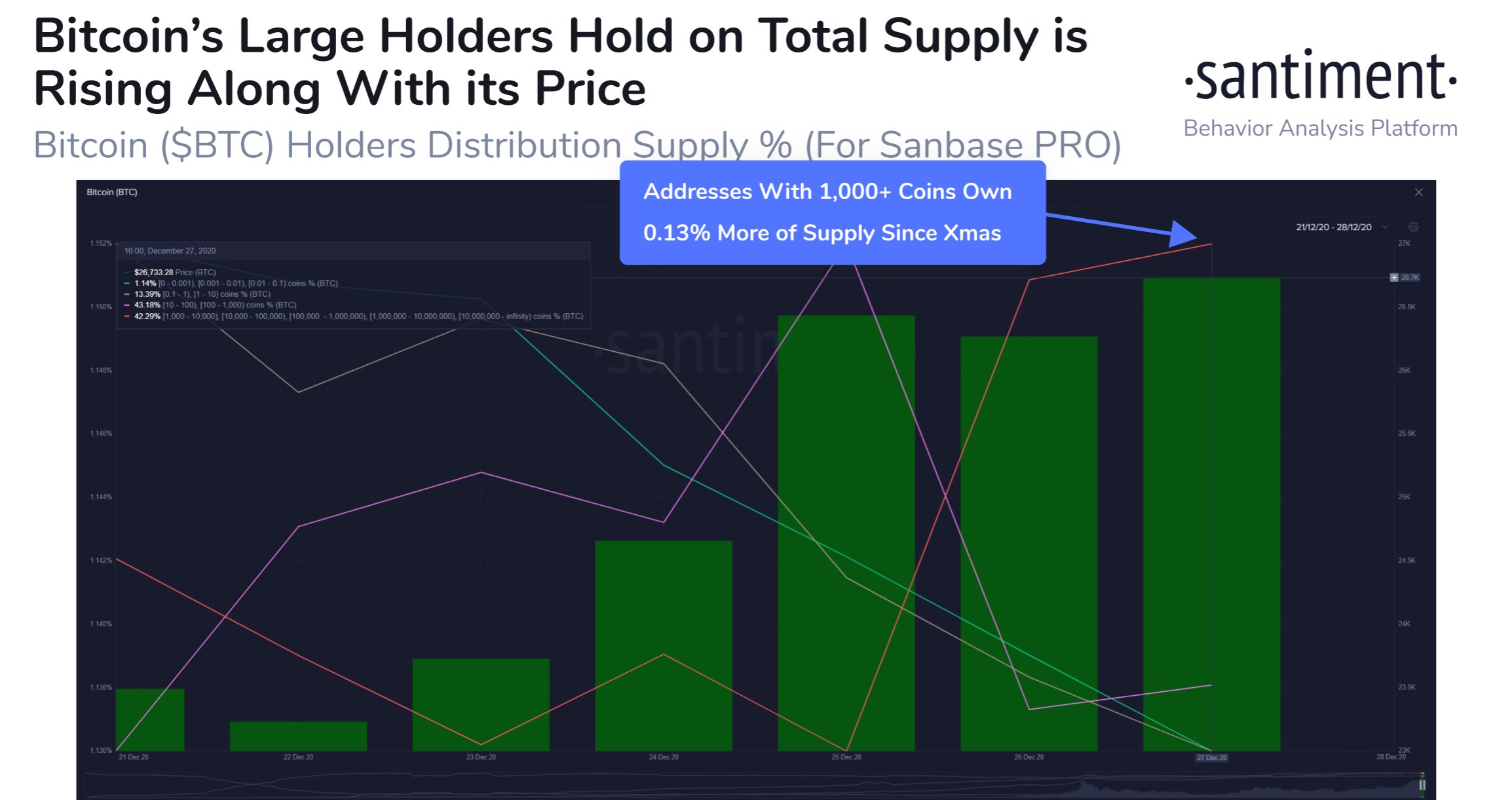 Why are whales continuing to buy more Bitcoin?

According to the analysts at Santiment, around $647 million worth of Bitcoin likely transferred from small addresses to large addresses.

Addresses holding over 1,000 BTC or more are considered as whales by many analysts, as 1,000 BTC is equivalent to over $27 million at the current price at $27,100. The analysts wrote:

“Over the last 48 hours since Christmas, #Bitcoin addresses with 1,000 or more $BTC now own 0.13% more of the supply that smaller addresses did previously. This is about 24,158 tokens, which translates to $647.7M at the time of this writing.”

Bitcoin has increased by nearly three-fold since mid-2020 and the upside for BTC is arguably limited in the near future.

“BTC whales seem exhausted to sell. Fewer whales are depositing to exchanges. I think this bull-run will continue as institutional investors keep buying and Exchange Whale Ratio keeps below 85%.”

There are two main reasons why whales might be accumulating Bitcoin at the current price range.

First, in spite of Bitcoin’s overextended rally, whales might believe that the psychological barrier at $30,000 would break. If so, options data suggest $36,000 could be a likely target in the near term.

Second, there is no solid reason to anticipate a major correction coming apart from the CME gap and the high futures market funding rate.

But, if Bitcoin consolidates after each rally, as seen in the past two days, then the funding rate would likely normalize. When that happens, the derivatives market would be less overheated, raising the probability of a new rally.

A pseudonymous trader known as “Byzantine General” said that the market is currently giving conflicting signals. Both long and short contract holders are being aggressive, which makes both long and short squeeze possible. He said:

“Such conflicting signals rn. Both longs & shorts are being overly aggressive lol. I should probably sit on my hands.”

The likely near term scenario is more consolidation

Typically, the price of Bitcoin on Coinbase is higher than Binance and other Tether-reliant exchanges. However, in the past week, Bitcoin has been trading slightly lower on Coinbase by around $20 to $30.

Although the gap is small, it shows that the U.S., which drove Bitcoin’s rally throughout December, might be seeing slowing buyer demand. But, the Asian market and the derivatives market are seeing an increase in buyer demand.

Considering that the demand for Bitcoin in the U.S. spot market appears to be cooling down, Bitcoin could consolidate for longer with lower volatility.